Vancouver, BC / TheNewswire / September 11, 2020 – Durango Resources Inc. (TSX.V-DGO) (Frankfurt-86A1) (OTCQB -ATOXF), (the “Company” or “Durango”) is pleased to report that further to its news release dated August 27, 2020, the exploration team has discovered a two metre wide shear zone at surface on its Trove Property while preparing the drill site for its exploration program at Windfall Lake, Québec.

Mechanical stripping commenced on the northeast extremity of the Trove Property to level and widen the access for the drill, exposing a two metre wide shear zone near Durango’s high priority drill targets. The shear zone appears to correlate with the geophysical anomalies and favourable IP signatures discovered in Durango’s previous exploration campaigns.

The trenching commenced as announced on August 27, 2020 and uncovered quartz veins at surface of over one metre in width. In addition to the quartz veining, visible rusty-coloured till is evident, which warrants the collection and analysis of additional till samples in the area. A photo of the till can be seen on Durango’s website in the newly established photo gallery under the “Windfall Lake Property” tab. https://durangoresourcesinc.com/projects/windfall-lake-properties-quebec/#windfall-photos&gid=1&pid=2 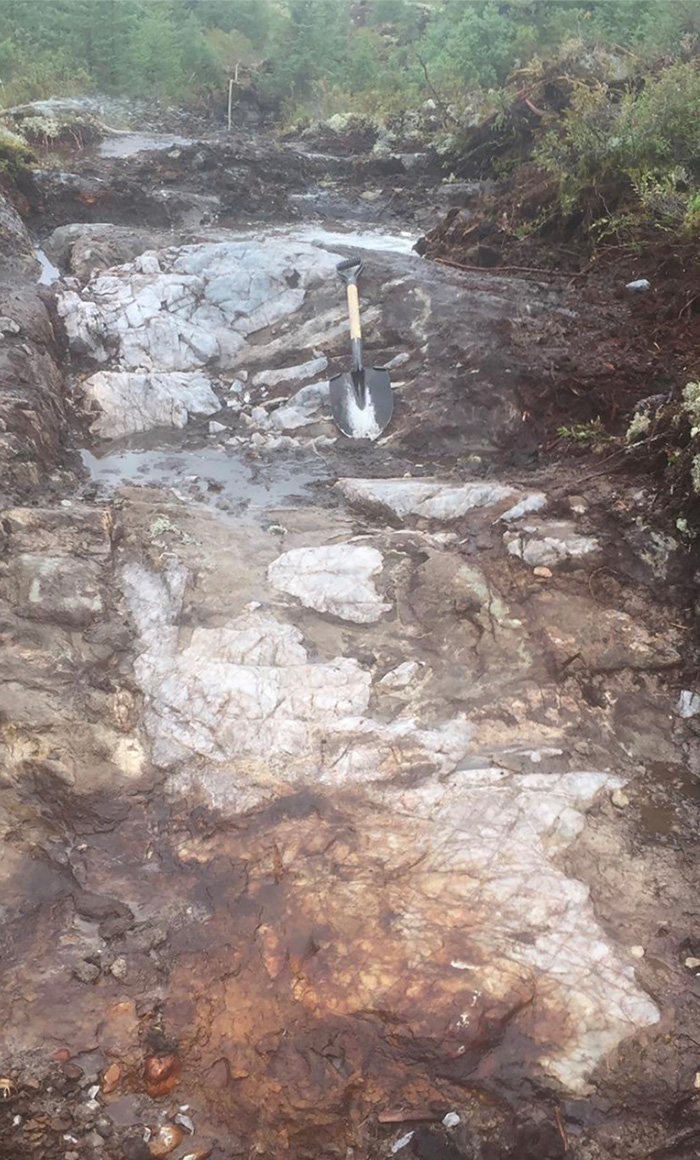 Marcy Kiesman, CEO of Durango, stated, “Durango is off to a great start on Phase I of its fall exploration program at Windfall Lake. In the first week of the program, the geological team has discovered a sizable shear zone, quartz veining at surface and rusty till near the initial drill targets. We continue to be very optimistic for Durango’s program at Windfall Lake and believe the upside potential for the Trove and East Barry properties is high. As we move through this fall program we look forward to the analysis of the field data as it is our intention to continue drilling into the winter.”

The technical contents of this press release were approved by George Yordanov, professional geologist, an Independent Qualified Person as defined by National Instrument 43-101. The Trove and East Barry properties have not yet been subject to an NI-43-101 report.

The Board of Directors has approved the grant of 3,000,000 stock options to certain directors, officers and consultants of the Company. The options will be granted pursuant to the Company’s 10% rolling stock option plan with an exercise price of $0.125 per share for five years. The option grants are subject to final approval of the TSX Venture Exchange.

Durango owns 100% interest in the Trove claims, which are surrounded by Osisko Mining Inc. (TSX: OSK), in the Windfall Lake area between Val d’Or and Chibougamau, Québec. The 1,185 hectare property is compelling due to the coincidence of gold found in tills coinciding with magnetic highs, several Induced Polarization anomalies and two faults crosscutting the property.  The fault systems north and south of the Trove, control gold mineralization elsewhere, indicating the Trove has excellent exploration potential. Durango received all the final drill permits for the Trove property in September 2019 and ready to undertake its inaugural drill program.

Durango owns 100% interest in the East Barry claims which run parallel to its Trove claims. The East Barry block is over 7,740 hectares in size and borders the eastern perimeter of Osisko’s holdings and the southern perimeter of Bonterra’s holdings and is less than 4km south of the Gladiator deposit. The East Barry claims host a gold trend which covers approximately 10km in length and is subparallel to the main Barry Fault held by Osisko. In 2018 a till sampling program was conducted and one of the till samples returned fourty-two (42) pristine gold grains with reported gold values of 2.184 g/t Au. A high count of pristine gold grains indicates that the gold has travelled a very short distance from its source. The East Barry block underwent an Induced Polarization survey in 2018 which identified a high priority target coincident with the high count of pristine gold grains.