Vancouver, BC / TheNewswire / October 21, 2020 – Durango Resources Inc. (TSX.V-DGO) (Frankfurt-86A1) (OTCQB -ATOXF), (the “Company” or “Durango”) is pleased to report that further to its news release dated October 8, 2020, the Company has started an exploration program on the East Barry Property which is located 2km east of the Trove Property at Windfall Lake, Québec.

The East Barry Property was recently expanded in size and is now 7,740 hectares, bordering Osisko Mining Inc. (TSX:OSK) on the west and Bonterra Resources Inc. (TSXV:BTR) on the north. Durango’s exploration crew was tasked with exploring the East Barry along the 10km long gold in till trend for geological reconnaissance. The crew has also been asked to proceed with a north south Spontaneous Polarity (“SP”) geophysical survey across an area of high interest.

Due to the rehabilitation of old access roads, the exploration team is able to complete geological reconnaissance in areas previously unaccessible on the East Barry Property. New outcrops have been discovered on high ground providing key geological information for the area. During this exploration campaign on the East Barry Property, a mineralized quartz feldspar porphyry (“QFP”) dike associated with quartz veins was discovered (see Figure 1). 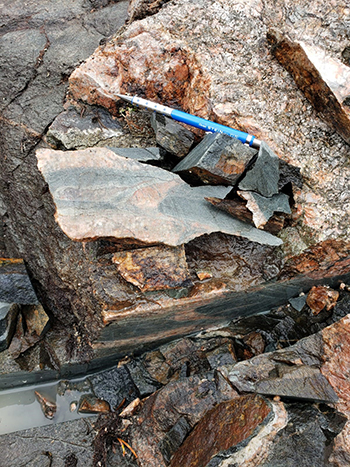 Figure 1. QFP dike with 0.5 to 1% pyrite mineralization along the newly cleared road.

Marcy Kiesman, CEO of Durango, stated, “Durango’s exploration crew took the opportunity of favourable weather and newly rehabilitated roads to expand the ground exploration program onto the East Barry Property. The East Barry Property has minimal outcrop, so all of the information we can gather on rock exposure is extremely important in order to identify geological similarities with the Windfall Lake deposit and potential mineralization associations. Durango will continue to explore the East Barry Property in the upcoming weeks concurrently with its ongoing drill campaign on the Trove Property. We look forward to analyzing the results in comparison with our neighbours’ data.”

Durango owns 100% interest in the Trove claims, which are surrounded by Osisko Mining Inc. (TSX-OSK), in the Windfall Lake area between Val d’Or and Chibougamau, Québec. The 1,185 hectare property is compelling due to the coincidence of gold found in tills coinciding with magnetic highs, several Induced Polarization anomalies and two faults crosscutting the property.  The fault systems north and south of the Trove, control gold mineralization elsewhere, indicating the Trove has excellent exploration potential. Durango received all the final drill permits for the Trove property in September 2019 and is currently undertaking its inaugural drill program.

Durango owns 100% interest in the East Barry claims which run parallel to Trove claims. The East Barry block is over 7,740 hectares in size and borders the eastern perimeter of Osisko’s holdings and the southern perimeter of Bonterra’s holdings and is less than 4km south of the Gladiator deposit. The East Barry claims host a gold trend which covers approximately 10km in length and is subparallel to the main Barry Fault held by Osisko Mining. In 2018, a till sampling program was conducted by Durango and one of the till samples returned forty-two (42) pristine gold grains with reported gold values of 2.184 g/t Au.  A high count of pristine gold grains indicates that the gold has travelled a very short distance from its source. The East Barry block underwent an Induced Polarization (“IP”) survey in 2018 which identified a high priority target coincident with the high count of pristine gold grains.