Durango Reports Gold And Silver In Granite At East Barry

Vancouver, BC / TheNewswire / July 14, 2021 – Durango Resources Inc. (TSX.V-DGO) (Frankfurt-86A1) (OTCQB-ATOXF), (the “Company” or “Durango”) announces that the Company has received its assay results for the East Barry Property orientation drill program completed earlier this year and anomalous gold and silver have been discovered in a large granitic pluton.

The purpose of the initial East Barry drill campaign was to gain an understanding of the geology in the area and to identify the structure, dip, and fertility of the rock. The outcrop on the East Barry Property is limited and virtually no historical exploration has occurred on the property prior to the recent work completed by Durango. To date, knowledge of the area has been based solely on the geophysical surveys and till sampling completed by Durango.  Previous till surveys identified a gold trend of up to 10 km with gold assays reaching up to 2.19 g/t Au (Fig. 1). Durango’s exploratory drill holes were conducted as an initial step to help identify a prospective target for the source of the gold in the till, given the limited outcrop at surface. 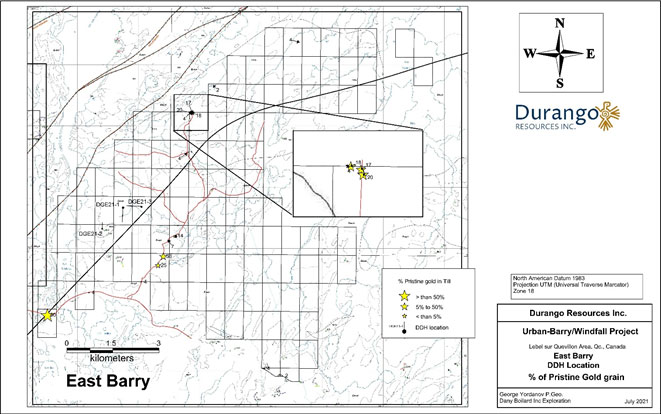 There were three HQ drill holes completed on the East Barry Property during the 2021 exploration campaign, namely;

Hole DGE21-1 was angled at 184/62 degrees and was drilled to 789 meters (640 meters vertical), with the objective of confirming the geology and structure interpretation that has been made based on local geophysical interpretation and till anomalies. The totality of the hole was represented by granitic to granodioritic rock and returned 1 meter of silver assaying 65 g/t Ag at 653m downhole. Chromium levels of 122ppm were associated with the silver anomaly as well as magnesium 2.39ppm, copper 147ppm and nickel of 55.9ppm.

Hole DGE21-2 was drilled with the objective of gaining structural orientation and was stopped at 372 meters (240 meters vertical). This hole returned 3.2 g/t Ag over the 237 - 238 meters interval and 1.7 g/t Ag at 345 - 346 meters. These intervals were both in a highly fractured zone, suggesting the importance of a brittle deformation zone to feed mineralization in the system.

Hole DGE21-3 was drilled to the east of hole DGE21-1 and was stopped at 808 meters (660 meters vertical depth). It intersected felsic granite with no visible indicators of alteration until a depth of 470m. Starting at 470m, an important epidote-biotite-amphibole-chlorite alteration zone and an amphibolite lens was observed. Brecciated zones were found within the amphibolite which were strongly altered. Felsic porphyry and pegmatitic decimetric to metric dykes were intercepted at multiple depths. The presence of hydrothermal alteration zones associated with a brittle structure indicates a prolific environment for gold mineralization.

Assays for hole DGE21-3 began at 153m and returned six one-meter intersections of anomalous gold values in the granite, ranging from 0.132 to 0.629 g/t Au, with a slight trend of increasing gold values with depth.  The presence of gold inside a large granitic pluton is positive for the East Barry Property as it indicates the hydrothermal system is carrying gold. Granitic intrusions are known for providing optimal sites for large volume gold-bearing systems.

The East Barry drill program was successful in identifying the fertility of the underlying rocks to carry gold and it also provided promising indicators that the gold values increase with depth and coincide with hydrothermal alteration zones, which is typical for the area. The geology on the East Barry Property continues to demonstrate that the Windfall Lake area was created by an extremely large deep-rooted hydrothermal gold system and that additional deeper drilling should be completed.

“We are pleased to have made a gold discovery in the granitic intrusion as it speaks to the potential of a nearby gold source and also coincides with the gold in the till that we have discovered on the East Barry Property to date. We now know that the hydrothermal system is in place on the East Barry Property and that it is carrying gold  which is exactly what we were hoping to discover with our test drilling. Durango’s team will promptly review all of the newly acquired data and to conduct further strategic drilling to find the main source of gold.”

The technical contents of this press release were approved by George Yordanov, professional geologist, an Independent Qualified Person as defined by National Instrument 43-101.

Durango also advises that, further to its news release dated February 18, 2021, that Core Consultants (“Core”) continues to service Durango in its IR efforts. As a result of the ongoing delays in receiving its assay results from past exploration programs related to COVID-19, management has thus far spent only a fraction of the USD$120,000 budget that was previously announced. As the country continues to resume economic activity and staff in the assay labs return to work, Durango and Core will manage its IR spending in a deliberate, focused manner as additional results become available.

The Company would like to thank Ms. Twila Jensen for her service as an independent director on Durango’s Board for the past six years. Ms. Jensen has decided to focus her time on her role as VP of Sales and Marketing of Stockhouse where she has worked for the past 8 years. The Durango team looks forward to continuing to work with Ms. Jensen in her marketing capacity at Stockhouse.

Such statements and information are based on numerous assumptions regarding present and future business strategies and the environment in which the Company will operate in the future, including the price of minerals, the ability to achieve its goals, the COVID-19 pandemic, that general business and economic conditions will not change in a material adverse manner, that financing will be available if and when needed and on reasonable terms. Such forward-looking information reflects the Company’s views with respect to future events and is subject to risks, uncertainties and assumptions, including those filed under the Company’s profile on SEDAR at www.sedar.com. Factors that could cause actual results to differ materially from those in forward looking statements include, but are not limited to, continued availability of capital and financing and general economic, market or business conditions. The Company does not undertake to update forward‐looking statements or forward‐looking information, except as required by law.